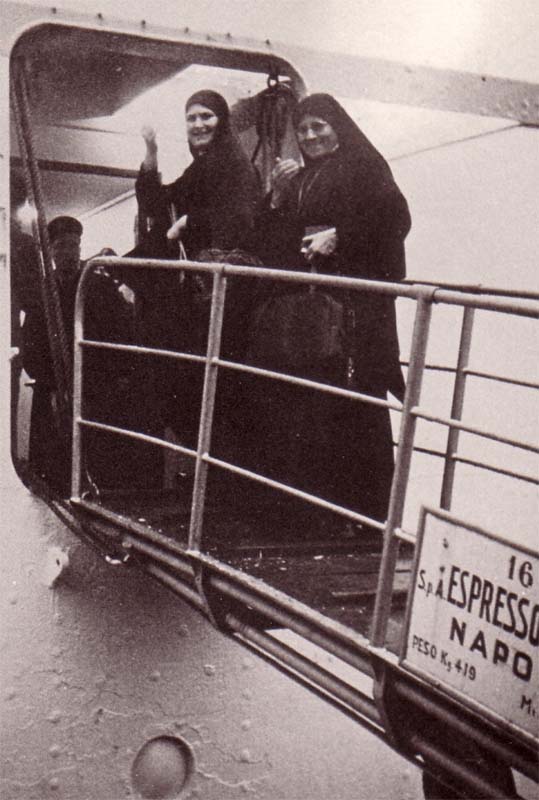 The Sister Disciples of the Divine Master are part of the Pauline Family founded by Blessed James Alberione in Alba, Italy on 10 February 1924. We are the third institute of the Pauline Family. In communion of spirit with this family, we are called “to live Jesus Christ and to serve the Church.”

The essence of the Sister Disciples’ life is Jesus Master, Way, Truth and Life. He has called us to follow him and to proclaim him to the world through our Eucharistic-Priestly-Liturgical apostolate.

And so, in 1956, two sisters waved goodbye to their community and homeland and left from Naples on a ship bound for Sydney, Australia. They were to be the first missionaries to this continent, placing all their trust in the Lord in faith following the desire of the Founder to extend our mission to “promising Oceania”.

Mother Annunziata Stanizzi and Sister Mary Laurentina Bertero left at midnight for a strange land, in which they knew they would find many difficulties. They were the first Pious Disciples to grace our land.

God, in His Love, showed them that they were not alone, and a third sister arrived to share their trials with them. Soon God smiled again on these sisters with the arrival of Sister Mary Ilaria Oyama. Sr M Ilaria is a Japanese sister, who spoke only her own native language and so, could not communicate with any of the others in the community. The sisters devised a kind of sign language which sufficed until she was able to pick up a basic knowledge of Italian. What a great suffering it must have been for the young sister! But, this too was one of God’s way of testing their generosity, for He manifested Himself to the group through suffering. 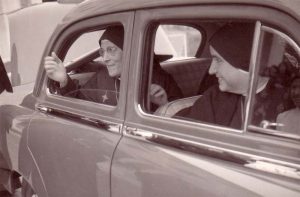 On the 14th June, Sister Mary Angelica Shirota arrived from Japan. Although she, too, spoke only Japanese, Sister Ilaria, who was now picking up Italian, helped her overcome her linguistic difficulty.

Then, on the 28th June Sister Mary Bernadette Abdilla, a Maltese sister, arrived. She spoke English, Maltese and Italian and so was a valuable addition to the little group.

At on the same day, Mother was again at the airport, after a hurried return at short notice to meet Sr Ortensia Puente, a young Spanish sister, who took the group to a grand total of five.

In 1972 at the request of the Archbishop of Melbourne, the sisters extended their roots from NSW to Victoria and commenced the first house dedicated to the sick and elderly priests of the Archdiocese.

Our mission in Australia continues to grow and we are still able to continue what was started by our first five Sisters. We thank God for all the blessings he has bestowed on us until now. 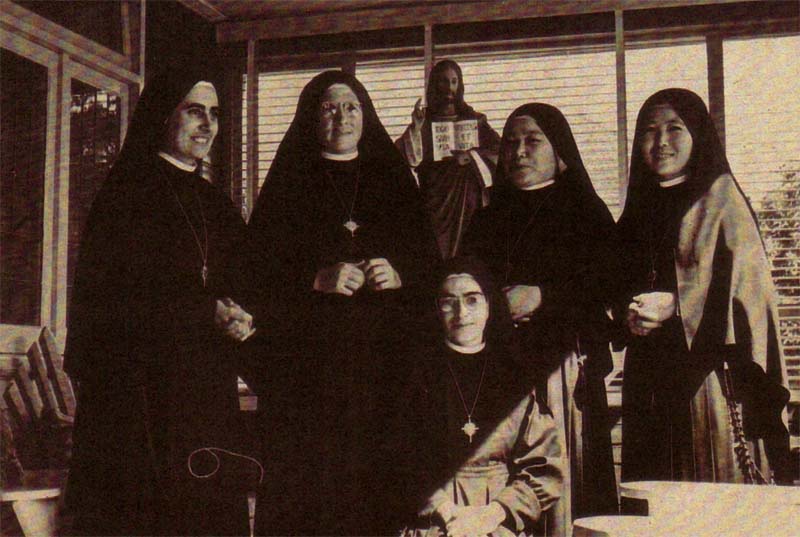 Our mission in the Church springs from one source and is directed toward one goal: the love of Jesus living in the Eucharist, in the Priesthood and in the Liturgy. We share in this common mission in honouring and serving Jesus Master, by bringing him to the people of Oceania, as the Way, Truth and Life through our Eucharistic, Priestly and Liturgical ministry.

The Eucharistic dimension of the Eucharistic-Priestly-Liturgical mission is the centre and unifying force of our lives and mission as Sister Disciples. From the Eucharist we draw light, joy, example and every grace, so as to be in Christ living and active members in the Church.

We participate in the mission of the ordained ministers in the spirit of Mary, most holy. As women associated with priestly zeal, we accompany the vocations to the priesthood and collaborate in their formation through prayer and service. We have a special concern also for those priests living in situations of poverty, sickness and old age.

One of our special ministries in the Archdiocese of Melbourne is the health and pastoral care rendered by our sisters to the retired priests in two hostels: Justin Villa at Balwyn and George Maher House at Clifton Hill.

Besides these two houses for priestly service, we also have Liturgical Apostolate Centres, one in Strathfield and another in Camberwell. A Liturgical Centre is a place where the beauty of the liturgy is promoted through quality liturgical vessels, vestments and furnishings. It has always been the policy of our Liturgical Centres that they are open to all denominations, and so collaborate in the ecumenical movement of the Church. 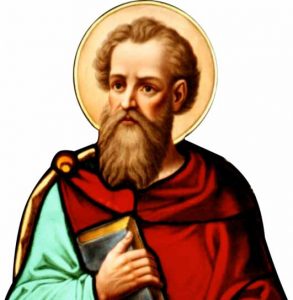 With the religious consecration we are called to commit ourselves to the constant journey of discipleship, until we become configures with Christ, in the example of St Paul: “I love now, not I, but Christ lives in me.” (Gal 20.2)

Called and gathered together by the love of God, we nourish our union with Him at the table of the Word and the Eucharist. Our discipleship is shaped on that of Mary who always contemplated His Word in her heart. From our intimate union with the Divine Master who is the Way, Truth and Life, we draw light, joy example and grace in order to be living and active members in the Church. This intimate relationship with Jesus is expressed through our Eucharistic, Priestly and Liturgical Ministry.

We look to Mary, the first disciple, who was obedient to the Word. Like her and the women of the Gospel we are sent to proclaim, celebrate and serve Jesus Master through our various ministries. 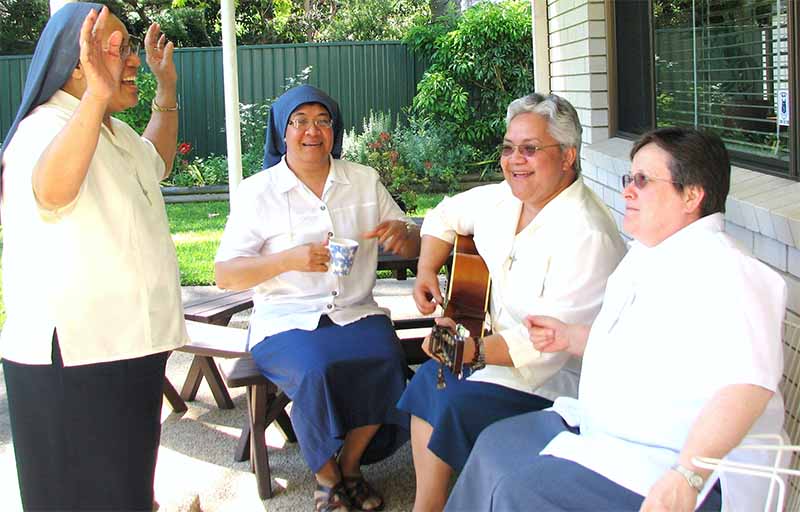 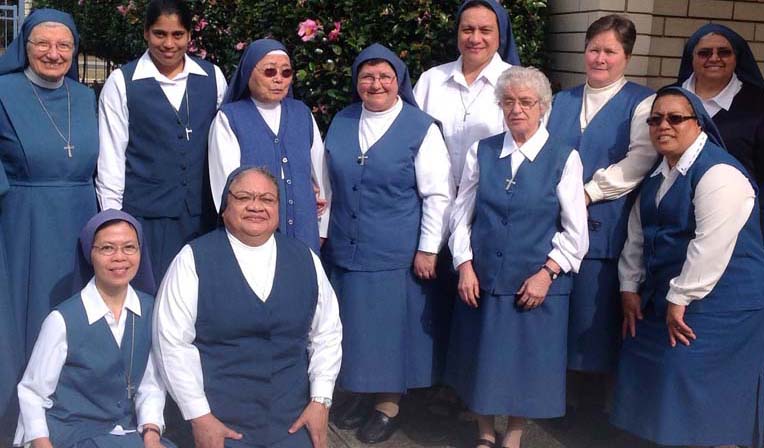 We are called to form a community of sisters. We base our relationships upon the words of Jesus Master: “By this love you have for one another, everyone will know that you are my disciples.”

The faithful are welcome in our Chapels to also spend time in Adoration before Jesus Master. They also join the Sisters in praying the Prayer of the Church (Morning and Evening Prayer).

On the first Wednesday of the month a roster has been established where the faithful assist the Sisters in maintaining continuous Adoration, from morning to late evening with a special intention for vocations to the Priesthood and Religious Life.

Pastoral Care to the sick and dying is also an expression of our Eucharistic ministry where we bring Jesus Master, Way, Truth and Life. This is facilitated by Prayer/Communion Services, counselling, pastoral listening, and having the privilege of being with them in their last moments and preparing them for this final journey.

The liturgical dimension of our mission puts us in the service of God’s people through various liturgical activities.

Our Liturgical Centres facilitate the distribution of our productions of various art forms linked to the liturgy such as painting, sculpture, architecture, vestments, music and so on.

In a world that has lost its sense of beauty and harmony, we desire to help the people of our times to “pray in beauty.” In its various forms, the arts and crafts are our instruments in communicating with God and communicating God.

OUR MINISTRY TO PRIESTHOOD 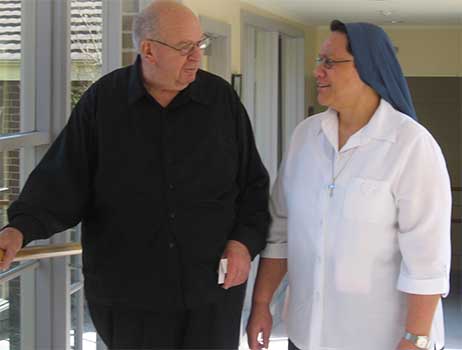 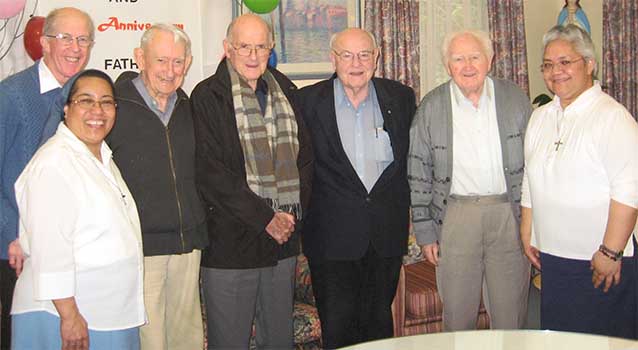 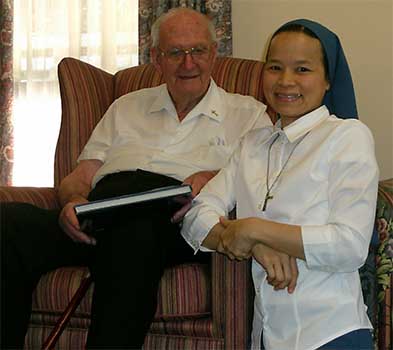 As we are all called to a holy priesthood, our particular expression of this is in actual service to Priests. We pray for vocations to the priesthood, we collaborate in their development by supporting them by our prayers, we assist them in the exercise of their ministry and in difficult situations such as sickness, old age and death.

In the spirit of Mary who accompanied Jesus and the Apostles in life, work and sacrifice we offer our assistance in simplicity and devotion.
In our Delegation we have two Priestly Houses under our care in the Archdiocese of Melbourne – Justin Villa and George Maher House where nursing and pastoral care is given to the sick and elderly priests.